Another very minor update for Battle Ball, but completely different for us.As of this update, Battle Ball is now written in ActionScript 3. Big deal right? This means that the updates for mobile and browser can be syncronized easily, providing faster updates and less confusion. To further increase syncronisation, the version labeling of Battle Ball versions has been changed. Without further jibber-jabber about useless complicated backend stuff, here are the changes that will actually affect you:

Features:
Bugs Squashed:
Posted by Tiuipuv at 11:37 PM No comments:

Over here at Time Bending Games, we have made a few changes to Battle Ball Mobile beta testing. As of today, anyone can join the program by following this link on their android device:

This means easier opt in, which provides more feedback for us, and thus more updates and tweaks! Wooo!! One thing to note, this blog will *most likely not* be posting updated versions of Battle Ball Mobile. The release notes can be found on the google play store. for a history of updates, contact us and we will try to send you a list of all previous recorded updates. Until next time,

Jordan
Posted by Tiuipuv at 2:42 PM No comments:

Not as major as the last update, but smooths lots of things over. Here are the latest and greatest features implemented and bugs squashed:

Here at Time Bending Games we have just released the first ever beta version of Battle Ball to the Google Play Store. The features of the mobile version are exactly the same as the browser version at this point, but will most likely fall behind the main version with future updates. 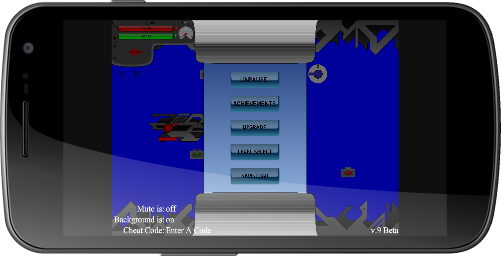 Since it is in beta, you will not find it in the store just by doing a search for it. Unfortunately, it is only tested on a group of people. To join in the fun, send me an email tiuipuv(AT)gmail(DOT)com and I will add you to the group of beta testers.

Figured it was time for a nice polishing update to cover up the big 1.3 update a while back. Though there are not many new huge features, this update is sure to smooth out a lot of gameplay issues. This update includes, but is not limited to:
Bug Fixes:

Posted by Tiuipuv at 7:16 PM No comments:

Firstly I would like to say..... BATTLE BAAAALLLLLLL!!!!! Just, WOOOO!!! Anyway, this is another one of those spooky updates pumping out the Time Bending Games factory. This is the biggest update Battle Ball has ever had since initial release. The entire game has been rewritten at its core, so that caused the most delay. So here are the notes:
Bugs that be squashed:

Not that much info right? Sure. Not all changes are listed, mostly because the list was created more recent than the changes, so for those not listed, I'm sorry for not putting them here (not really). Accompanying this update (or more like battle ball v.87 ish) is being tested in a select group of mobile phones, with sweeto-neeto-kinda-nifty tilty functionality. The mobile may be released to the google play store at version 1.0 (can't imagine how much longer it will be till then, if history is any indicator, 2 and a halfish years :P ). Curious about Space Conquest, or Sky Drive? Cool. As for Space Conquest, we have just level 20 to design and implement, and pwoosh, factory starts pumping out a new update (for the very, very small fee of free). Sky Drive is still in the idea gathering phase, as well as the data collection phase for those who play on kongregate, so no update is in the works yet. Anywho,

Posted by Tiuipuv at 7:43 PM No comments: